The intrepid WJ17 4+ of Nell, Daisy, Jess, Kezia and Sophie loaded the Anne B Too onto the trailer and made for the tideway course. Over the 4.25 mile course, the girls placed 14th in their category with a time of 22:30.

A thoroughly enjoyable day on the Thames was had by crew, coach and supporters alike. Many thanks to Clare BC and in particular Anton for loan of the Anne B Too for racing this season.

Over 3 2.6km legs, the Sunshine crew emerged victorious in the WIM3 8+ category in a cumulative time of 34:17, beating their nearest opposition the Champs Holt crew into 2nd place.

The Campbell crew were placed second in the Masters 8s after handicapping (without it they stormed the field!).

Champs enjoyed a successful and sunny day of racing at Norwich HORR on the weekend.

Over the 5k course, the ‘Oarsome’ crew came 2nd in their division, despite doing running repairs on the boat midway. The WJ17 coxed four beat their competition by 40 seconds, and 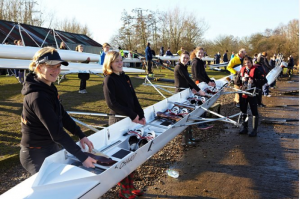 the ‘Zephyr’ crew put in a good result after being pushed up to the IM2 category. Matt Haynes performed well on the short course, beating his rival by almost a minute.

The crews made a fair dent on the Norwich Rowing Club cake stall, which was almost as plentiful as the one we expect to see at the Champs Junior Sculling Head!